Tell us about your background.
I was born and grew up in Liverpool as the middle daughter in a football-mad family. In 2017, I decided I’d had enough of my job in research so decided to move to Berlin, where I took my English teaching qualifications. After a few months pondering what I wanted to do next, a teaching job in Hong Kong came up – it was a no-brainer.

When did you move to Hong Kong?
I moved here in August 2018.

What do you do for a living?
I’m a private English tutor, which is good because I get to teach all ages, all over Hong Kong. I’m writing this just before a lesson, sitting on a bench in South Bay on a beautiful sunny morning.

Ideal holiday?
Without a doubt, a long weekend in Madrid. One of my sisters used to live there and through visiting her and trips back since, I must have been about 10 times now. It has everything you’d want in a city – good food and drink, great nightlife, interesting people, beautiful architecture and parks, and a cider house that sells the best chicken in the West.

Hobbies
Hand me an iPhone, and I think I’m Mario Testino. Hong Kong is such a mashup of everything and is a really interesting place to photograph.

How long have you been supporting Liverpool?
It’s hard to remember a time when I didn’t. I think my earliest memory of being an “active” supporter was going to Melwood to see the players when I was about five. My sister and I got all of the players’ autographs in a little autograph book we got free with the Match magazine. We still have it somewhere.

What was the first game you attended?
I needed help remembering this so messaged my dad to check. His exact response was: “West Ham when Titi Camara scored the winner the day his dad died. Why?” – quite impressive for a man who can’t remember my age!

How will Liverpool’s season finish?
Now I don’t want to jinx things, but I’d be surprised if we didn’t make the top 4.

Favourite ever Liverpool goal?
Smicer’s goal in Istanbul. Not the prettiest of goals, but I can still remember exactly how I felt when it went in. His look of joy/disbelief perfectly summed it up. I think it was the moment when we all realistically started thinking “We can do this!”.

Favourite current Liverpool player?
Bobby – so special and unique in every single way. He’s a joy to have in our team.

Favourite past Liverpool player?
Xabi Alonso was mesmerising at times, especially alongside Gerrard. I loved watching Jari Litmanen in the games he played for us too, and I’ve always had a soft spot for Gary McAllister.

How did you find out about the Hong Kong Reds?
Google – it was one of the first things I researched when I found out I was moving to Hong Kong. It took me a while to pluck up the courage to start coming to matches though, but I’m so glad I did!

What does the Supporters’ Club mean to you?
Having moved so far away from home to a place where I didn’t know anyone, I feel really lucky to have found such a lovely bunch, who not only love Liverpool but are also really decent people. It helps that we all like beer too.

What’s the best part about being an LFC fan?
Feeling that you’re part of something special. And having that ingrained sense that we’re capable of absolutely anything.

What’s the worst part about being an LFC fan?
In the time that I’ve been watching football, the number of times we’ve come so close to winning things, especially the league, but ultimately haven’t. And the almost-Shakespearean ways we’ve missed out, Gerrard vs Chelsea in 2013/14 being a prime example – although maybe that’s part of the poetry.

Why is The Lockhart 88 a good venue for the Supporters’ Club?
In a couple of words – the staff. They really go above and beyond for us every single match.

How does it feel watching games so late at night, especially mid-week games?
I think knowing we’ll all be in the same state for work the next day really lends itself to a sense of camaraderie.

All-time favourite LFC moment?
Being stood on St George’s Plateau in Liverpool for the homecoming in 2005 – I’ve never experienced an atmosphere like it, and doubt I ever will again. A close second is the time my dad walked square into the window of the club shop at Anfield thinking it was an automatic door.

Favourite Supporters Club moment?
Obviously winning the Champions League in June was a pretty special night, but I’d go for the Barcelona second leg, when just a handful of us thought “Ah well, we’ve got nothing to lose” and showed up in the early hours of a Wednesday morning to watch one of the greatest comebacks in history.

What was the last album you listened to?
Carry On by Willy Mason.

What was your worst haircut?
I can’t think of words to describe it so… 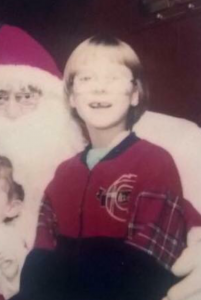 What phrase or word do you hate?
Anything you’d hear on The Apprentice that’s made its way into real life. I also specifically don’t like the way Chris Tarrant used to pronounce any county with “-shire” in its name on Who Wants To Be A Millionaire – it still bothers me now.

What’s the stupidest thing you’ve ever done while drunk?
When I was younger, locking myself out of the house after a night out when my parents and sisters were away. As luck would have it, someone had left a wooden pallet in the front, which I used as a makeshift stepladder to climb our side gate. Then I used a garden hoe to prise open the back door. Drunk enough for that all to seem like a reasonable course of action, but sober enough not to die scaling a seven-foot-high fence in platform heels.

What’s your most embarrassing moment?
A very traumatic incident in Copenhagen, when I was using the (unisex) toilets in a very cool, hipster café.
I couldn’t work the lock on the cubicle door so asked my sister to stand outside and prevent anyone from trying to open it.
The cubicle was very small, and there was just enough room to sit on the loo with your knees grazing the door, which opened outwards. I didn’t want to knock the door open mid-wee so figured it would be a sensible idea to sit sideways, just this once . At some point during my wee, my (former) sister abandoned door duties to fix her hair in the mirror.
Everything went in slow motion as the door swung away from me to reveal half of the British stag party that had been sat on the next table, all staring aghast at me sitting side-saddle on a pull-chain toilet. The lad who’d opened the door was mortified and it took a good four or five seconds of us all staring at each other horrified before he could react and close the door. None of them even laughed.

What do you do in the mornings before work?
Lately, I’ve been listening to loads of podcasts. Aside from football-related ones, I’ve really been enjoying 99% Invisible, which is about architecture, design and technology in the broadest sense (so there’s something for everyone). I’d also recommend Ed Miliband’s Reasons to Be Cheerful for anyone who needs a pick-me-up from what’s going on politically at the moment.